Libreswan comes with an extensive test suite, written mostly in python, that uses KVM virtual machines and virtual networks. It has replaced the old UML test suite. Apart from KVM, the test suite uses libvirtd and qemu. It is strongly recommended to run the test suite natively on the OS (not in a VM itself) on a machine that has a CPU wth virtualization instructions. The PLAN9 filesystem (9p) is used to mount host directories in the guests - NFS is avoided to prevent network lockups when an IPsec test case would cripple the guest's networking. 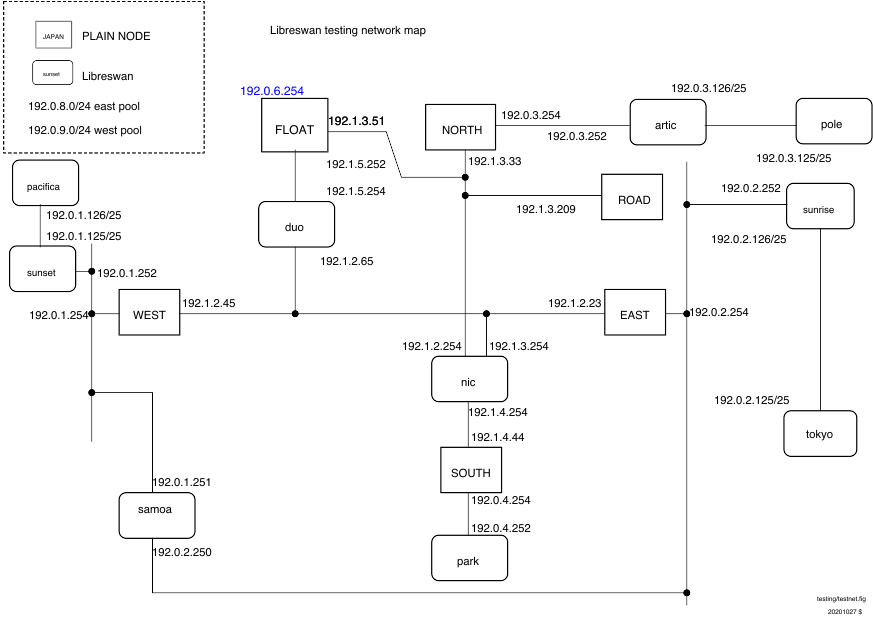 Nothing apart from the system services requires root access. However, it does require that the user you are using is allowed to run various commands as root via sudo. Additionally, libvirt assumes the VMs are running under the qemu uid, but because we want to share files using the 9p filesystem between host and guests, we want the VMs to run under our own uid. The easiest solution to accomplish all of these is to add your user (for example the username "build") to the kvm, qemu and wheel groups. These are the changed lines from /etc/groups:

Commands to effect this:

And the file /etc/sudoers would have a line:

You might need to relogin for all group changes to take effect.

Now we are ready to install the various components of libvirtd, qemu and kvm and then start the libvirtd service.

Various tools are used or convenient to have when running tests:

The libreswan source tree includes all the components that are used on the host and inside the test VMs. To get the latest source code using git:

A configuration file called kvmsetup.sh is used to configure a few parameters for the test suite:

This file contains various environment variables used for creating and running the tests. In the example version, the KVMPREFIX= is set to the home directory of the user "build". The POOLSPACE= is where all the VM images will be stored. There should be at least 16GB of free disk space in the pool/ directory. You can change the OSTYPE= if you prefer to use ubuntu guests over fedora guests. We recommend that the host and guest run the same OS - it makes things like running gdb on the host for core dumps created in the guests much easier. The OSMEDIA= can be changed to point to a local distribution mirror.

If you wish to be able to ssh into all the VMs created without using a password, add your ssh public key to testing/baseconfigs/all/etc/ssh/authorized_keys. This file is installed as /root/.ssh/authorized_keys on all VMs

Once the kvmsetup.sh file has been edited, we can create the VMs:

First, a new VM is added to the system called "fedorabase" (or "ubuntubase"). This is an automated minimal install using kickstart. In the "post install" phase of the anaconda installer, this VM runs a "yum update" to ensure we have the latest versions of all packages. In that %post phase we also install various packages that we need to run the tests. This can result in the installer spending a very long time in the "post install" phase. During this time, the VM displays no progress bar. Just be patient.

Once the VM is fully installed, the disk image is converted to QCOW and copied for each test VM, west, east, north, road and nic. A few virtual networks are created to hook up the VMs in isolation. These virtual networks have names like "192_1_2_0" and use bridge interfaces names like "swan12". Finally, the actual VMs are added to the system's libvirt/KVM system and the "fedorabase" VM is deleted.

Since you will be using ssh a lot to login to these machines, it is recommended to put their names in /etc/hosts:

Logging into the VMs

You can login to the VMs in three different ways:

Using ssh becomes easier if you are running ssh-agent (you probably are) and your public key is known to the virtual machine. This command, run on the host, installs your public key on the root account of the guest machines west. This assumes that west is up (it might not be, but you can put this off until you actually need ssh, at which time the machine would need to be up anyway). Remember that the root password on each guest machine is "swan".

You can use ssh-copy for any VM. Unfortunately, the key is forgotten when the VM is restarted.

The VMs came pre-installed with everything, except libreswan. We do not want to use the OS libreswan package because we want to run our own version to test our code changes. Some of the test cases use the NETKEY/XFRM IPsec stack but most test cases use the KLIPS IPsec stack. Login to the first VM and compile and install the libreswan userland and KLIPS ipsec kernel module:

swan-update first builds libreswan and then installs libreswan. For the other VMs (except "nic" which never runs IPsec) we only need to install, as libreswan is already built in the first VM.

All VMs are now fully provisioned to run test cases.

All the test cases involving VMs are located in the libreswan directory under testing/pluto/ . The most basic test case is called basic-pluto-01. Each test case consists of a few files:

You can run this test case by issuing the following command on the host:

Once the testrun has completed, you will see an OUTPUT/ directory in the test case directory:

Diagnosing inside the VM

Once a test run has completed, the VMs shut down the ipsec subsystem. You can use ssh to login as root on any host (password "swan") and rerun the testcase manually. This gives you a chance to repeat a crasher while using gdb. You need three terminals to do this.

This assumes that initialization worked and pluto hasn't yet crashed. Pick the side you wish to gdb, ssh in, and start gdb

When pluto crashes, gdb will show that and await commands. For example, the bt command will show a backtrace.

Diagnosing inside the VM (alternative version)

Once a testrun has completed, the VMs shut down the ipsec subsystem. You can use ssh to login as root on any host (password "swan") and rerun the testcase manually. This gives you a chance to repeat a crasher while using gdb:

In another window, prepare west:

In still another window, you can login to east and re-trigger the failure. You can either use the root command history using the arrow keys to start ipsec and load the right connection, or you can re-run the "eastinit.sh" file:

In the west window, you can either continue with running "westrun.sh" or you can look at westrun.sh and issue the commands manually.

To run all test cases, you need to be able to compile libreswan on the host (not for any good reason, but "make check" runs "make programs" first). You might need to install some build requirements:

To run all test cases (which include non-VM based test cases), run:

Sometimes you want to update a VM's system or add a package to assist with debugging. This requires an internet connection. While the VMs are completely isolated, the "nic" VM can be configured to give internet access to the machines:

The guestbin directory contains scripts that are used within the VMs only.

When the VMs were installed, an XML configuration file from testing/libvirt/vm/ was used to configure each VM with the right disks, mounts and nic cards. Each VM mounts the libreswan directory as /source and the libreswan/testing/ directory as /testing . This makes the /testing/guestbin/ directory available on the VMs. At boot, the VMs run /testing/guestbin/swan-transmogrify. This python script compares the nic of eth0 with the list of known MAC addresses from the XML files. By identifying the MAC, it knows which identity (west, east, etc) it should take on. Files are copied from /testing/baseconfigs/ into the VM's /etc directory and the network service is restarted.

These commands are used to build, install or build+install (update) the libreswan userland and kernel code

This command is run as the first command of each test case to setup the host. It copies the required files from /testing/baseconfigs/ and the specific test case files onto the VM test machine. It does not start libreswan. That is done in the "init.sh" script.

The swan-prep command takes two options. The --x509 option is required to copy in all the required certificates and update the NSS database. The --46 /--6 option is used to give the host IPv4 and/or IPv6 connectivity. Hosts per default only get IPv4 connectivity as this reduces the noise captured with tcpdump

These are used to fake a kernel into FIPS mode, which is required for some of the tests.